England are bad, but Ireland are worse

Some of my recent blogs have been about the inadequacies of the English FA and the current England squad. On reflection, maybe I was a bit too hard or even too quick to point the finger.  I mentioned the problem at grass roots level they currently have. I also discussed their lack of top players coming through. The new FA commission panel which includes the enlightened Danny Mills is another issue I could bring up. However, I think it’s time that I sit back and take stock. My own country, Ireland, is in a far worse state than our neighbours across the sea. If we think England have it bad, think again. Ireland is in dire straits at the minute.  In the words of the great Peter Cunnah of the band D-Ream “Things can only get better”. Well with Germany away tonight, I very much doubt it.

It’s pretty safe to say that Ireland won’t be enjoying the sun and sand of Rio next year.  It is not the first time we have missed out on major finals and it surely won’t be the last. But the reason behind Giovanni Trappatoni’s departure was the manner in which we missed the finals. For the last five years Trap has been criticised for his team selection.  He was berated for his lack of knowledge of Irish players and for not attending enough games to see prospective players. To many times he made the wrong calls and played too defensively. We went to Ukraine and Poland to participate in the Euros and decided to get the first bus home.  We were denied a World Cup place by a French Slam dunk but even if we did make it, the outcome would have been similar to that of the Euros.  So, is it Traps fault why we are where we are, back in the doldrums of international football? His record as manager wasn’t that bad if you look at it. Is it the fans fault for having the expectations set too high for such a small footballing nation? Is it John Delaney’s fault for just being John Delaney and sounding like he constantly has a blocked nose? Oh who cares, the fact of the matter is, we are where we are. No point blaming Trap, Thierry Henry or anyone else. Let’s stop feeling sorry for ourselves and start to do something about it.

There are many reasons behind our gradual decline. One that comes to mind is the current decline in kids playing sports on the street. If I go back to when I grew up, my friends and I would be out from morning until night playing football. Irrespective of our abilities, we played and played and played. When we went to the shop for a break, we dribbled the ball with us. When we sat down for a break, we practiced our volleys or tricks. Now things are different. Society doesn’t allow kids out for that amount of time unsupervised. You don’t play heads and volleys or reenact the Champions League final with your friends.  Their exposure to football is minimal. They see a football twice a week with their local team and maybe at lunch in school if they are lucky.  Otherwise its play dates, Xbox and WWE. 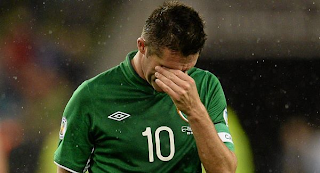 Another point is the resurgence of GAA and rugby as alternatives to football. Dublin, Leinster and Munster have given kids different avenues to become professional sports stars. Growing up, I only thought about football, that was it. Schools now have more options in terms of team sports. With the recent success of Dublin and the Irish club teams in the Heineken Cup, kids do not feel that football is the only sport. Diversity is good and kids having options in sport is great too. Not every child is suited to football.  So now football is battling with two resurging codes for children’s attention. And the worse Ireland get, the harder it will be to convince the youth of today.

Grass roots is an obvious issue. Like England, our grass roots coaching has not been up to scratch of late. Over the last three to four years I don’t know if it has improved. I have been out of the country. If it has, brilliant, but let’s be pessimistic and assume it has not. Look at the top six teams in England and how many Irish payers can you find. Coleman, McCarthy and Gibson of Everton.  Go on keep thinking. Don’t worry, ill wait. Take your time……….. Exactly! Remember Brady, Houghton, Whelan, Stapleton, Aldridge, McGrath, Keane , Irwin, Beglin and Moran. Back then we flooded the top teams. Even Robbie Keane at Spurs and Liverpool and Damien Duff at Chelsea.  Was it that football wasn’t as hard to break into back then? Was it because these legends played more football as kids than kids do now? Was it coaching? Did they have more ability than our current players do now? Playing football as a kid, I don’t remember the training sessions being too technical. I don’t recall talking about tactics or understanding shape or different formations.  I do remember standing around freezing, while we did passing drills. I do remember running and running and running. I also remember being picked because of my height and size rather than my ability (which may I add was nonexistent). I remember being told to turn the full backs with a ball over the top. “Get stuck in” was a regular call from the sideline and “if in doubt, knock it long”.  And I’m sure I wasn’t the only one who remembers all of the above.

As I said, I cannot comment on the current coaching in Ireland today, I don’t live there. I haven’t seen it with my own eyes. But put it this way, if it’s good, then it’s got to get better. It’s that simple. Starting from the bottom and improving as we go will put us in a better place. We need to realise our place in football right now though. We are minnows. We are a small footballing nation with some decent players who have pride and ability. But gone are the days of our players playing in the top teams. Gone are the days of getting ready for World Cups with giant inflatable tricolour hats and hammers from Crazy Prices (now Tesco). Trap is gone and the hunt for his successor is on. We all know the type of manager we want.  We want someone who knows our players, knows their strengths and weaknesses and is there for the long haul. We want someone who has a plan. We want someone who can communicate with the players and get along with the players.  Our expectations, our grass roots, our current squad and our battle with other sports all play a part in our slide into footballing darkness. But there is hope. Robbie Brady, James McCarthy and Hoolahan show us we have ability in abundance. Oh and don’t forget Adnan Januzaj, surely he can play for us cant he?

I hope tonight we do well. I would be happy with a good performance. Not brave, tackling and running around like bees after honey. Show the world we can pass a ball. Take a player on and be confident. Enjoy the night. Noel King takes charge tonight and no one can point any fingers at him. He is stepping in to help out. He has been a great servant for Ireland and deserves the rub of the green tonight.

It’s bad at the minute I’ll admit it. We all know it is. But you got to be able to stand the storm if you want to see the rainbow. Here’s hoping!
Posted by Unknown at 23:07